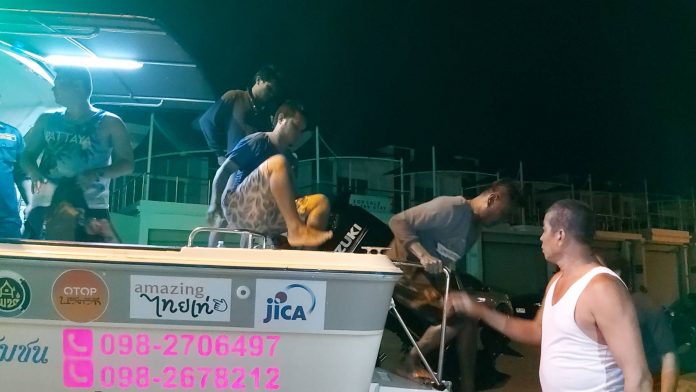 Sattahip –
Four local fishermen have been rescued after big waves hit their fishing boat in the sea at Sattahip last night.

Sawang Rojjana Thammasathan rescue workers were notified at 10PM that a fishing boat was sunk and three fishermen were still missing.

Another fisherman, 44 year old Anansak Janthima, had already been saved by another fishing boat.

Rescue divers have later found three missing fishermen which are Tinnawat Dansrikaew and Jaroon Jamsawat, both 31 years old, and 37 year old Mongkon Premmana. All three men were alive, but weak.

They were taken back to Bang Saray pier before taken to a local hospital.

Mr Anansak who is the boat captain said they were searching for fish near Koh Rang Kwean. There were several strong waves which hit the boat. The boat was sunk under the sea.

The men were holding boxes and floating in the sea before they got help.